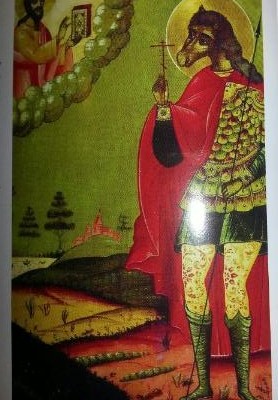 Saint Christopher’s Dog Face! The more I say it the more it sounds like a mild curse.

I should explain. My son will be 2 years old this month. We are starting to establish a bedtime prayer routine. Up until recently it was just God Bless this person and that person, thank You for this and that, tell Jesus you love Him, starting to learn some basic prayers like the Our Father or Hail Mary, and an unusually thorough examination of conscience initiated by him. These prayers were and are rambley and strange. My sister suggested a litany of saints, so we added that to his routine.

One Evening as I was listing saints, he chose to add to our list, “Chuck and Friends, Pray for us.”  I started to think back on some of the patrons we asked to pray for us and it occurred to me just how many of them probably had namesakes in our Netflix Recently Watched List.

Here are some crude renderings of what I picture as compared to how I imagine my son thinks of these saints. 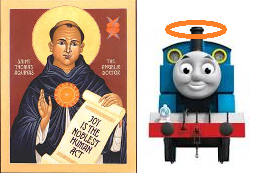 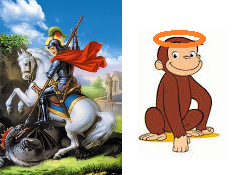 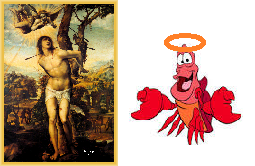 Hoping to remedy that situation by giving him new visuals, we began reading a book my mother gave us. (The Book of Saints: A History of Saints from the Time of Christ to the Present Day by Jo Rose)  Last night we were reading about the Legend of Saint. Christopher. Now, I had heard that it is legend and he might not exist but I was not prepared for this:

“Originally called Reprebus, he was a huge cannibalistic brute who lived in the wilderness. In earliest Eastern legends he is described as a cynocephalus, a race of monsters with the bodies of humans and the heads of dogs, who bark but cannot speak.” (Rose 16) 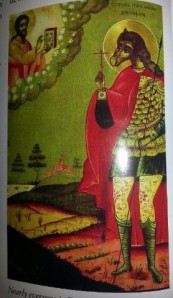 Source: The Book of Saints by Jo Rose

The legend  that goes on from there was the one we are accustomed to hearing about. He carries the Christ Child across the river and converts to Christianity. I was thoroughly weirded out, even more so than when I found out that St. Nicholas was believed to have slapped the heretic Arius. Santa Claus being a brawler I can make peace with more quickly than St. Christopher starting off as a mute, dog-headed cannibal.

I wonder what outrageous thing people of our time period believe in that will cause some future generation the level of dumbfoundedness I feel about people hearing of monster races of dog-headed humans and deciding that it seems legit. Or am I being a modernist snob for discounting them and dog-headed people are among the best kept secrets of the third century?