On the eve of the first day of school, it is customary to engage in some futile crafting, just to make use of some of that nervous energy. This year, I seem to have accidentally made things that will result in a better school year.

Easy, Lazywork: Hole punch as many index cards as you have students, then put them on a binder ring.

How it Works: Instead of some kind of rotating chart of class jobs with clothespins and heartache, just have one helper. If they seem overworked, let them pick someone else to help or do additional tasks. Next day, flip to the next card. You were absent on your day and got skipped? Boohoo, it’s a cruel world out there and if you don’t show up for work, someone else does your job (don’t say that.)

Where I Got It: Last year when I returned from maternity leave, my long term sub had instituted something of the sort and I thought it was fantastic. 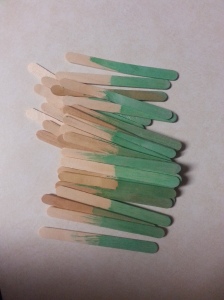 Easy Lazywork: There are actually 3 ways you can do this. The first is to put some hot-ish water in a disposable cup with food coloring, dump the popsicle sticks in, and walk away. The second would be to eat 30 popsicles, because their sticks will look like that anyway. The third way would be you’re an app person and go “oh, but there’s an app for that.” I know there is. I think it is stupid and I am not impressed.

There are no names in that picture. This is because I am FERPA Compliant(AND lazy.) Eventually these would need student names written on them. But, this was supposed to be lazywork and now that you mention it the index cards need names on them too! Just pick one to do. Write the names and make the first class helper make the sticks, or make the sticks and pick a random kid to do the index cards. I told you it could be lazy.

How it Works: When you have drawn a student “at random” rather than setting their stick aside to be lost or having to bundle them somehow, just flip it over so you know to draw from the wood side or the food coloring side.

Where I got it: Well it was a combination of every teacher ever and this lady of classroomchitchat.com. Hers are cutely painted though and clearly not lazy.

Easy Lazywork: Print this wrapping paper of the word “IN” that I made (clearly the actual making of it was not in the spirit of this post. I worked on it a while.)

Then glue it all over a box. Diaper or wipe boxes are recommended. Any kind of box should be fine. I don’t know what kind of boxes you have, I don’t know your life. Admission: I put packing tape all over it. That was not so lazy either.

How it Works: I used to just have an inbox. It was similarly decorated, but it was shallow. Great piles of paper would form strata that were not to be messed with, else my whole system was destroyed. “A bigger box, that seems worse!” you say. No. Put several large manilla envelopes in it. Put a strip of packing tape on them or learn to laminate them. Write the name of the assignment on the envelope. That is where it goes. Anywhere else, and its too bad for them they didn’t follow directions. Take them out, paper clip, them, put them wherever your ungraded papers sit, erase folder and repeat.

Why decorate it at all? Well despite the fact that I am opposed to classroom themes, (see here) the decorating theme sometimes ends up being boxes of paper. The kids are like, “which one is the inbox?” …..the one that says “IN” all over it.

Where I got it: The decoration idea comes from my smaller inbox which came from some thread on Craftser long before Pinterest was a thing. As for the drop box system…the internet. I try to source things and give people credit, but Pinterest isn’t great when it comes to that sort of thing (love the site, the fault lies in us, the users) I’m not trying that hard because my husband urgently needs the laptop as something important is about to happen in Fantasy Football.

Have a great year everyone!